Hiring Trends: Up, Down, Level 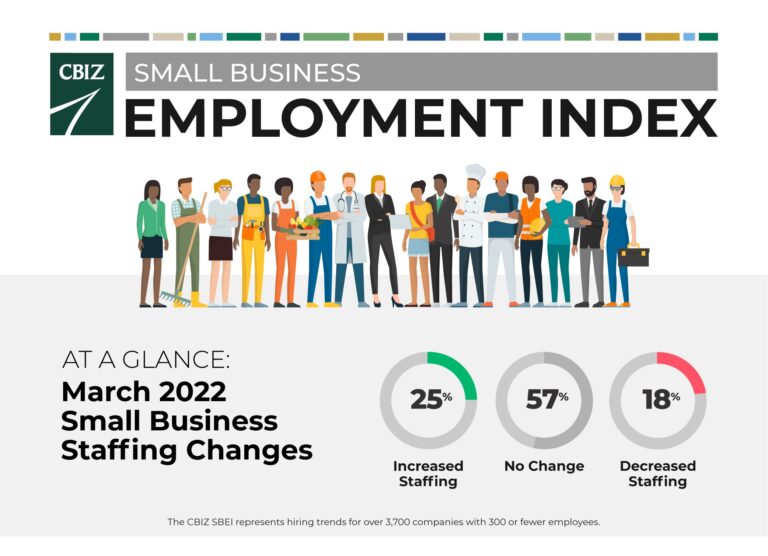 Many construction companies, especially subcontractors, are small business with under 300 people on staff. Tracking the hiring and employment rates for such companies is often limited—there are so many of them to survey—and they don’t get the coverage they deserve in the press reports on employment rise and fall. There are companies, however, that do track this category, although not specifically in construction, and we can get some feeling for this market from their research.

The SBEI (Small Business Employment Index) is reported by CBIZ, a provider of financial, insurance, and advisory services to businesses throughout the United States. The most recent SBEI report shows a seasonally adjusted increase of 0.1% in March, a reversal of the hiring declines seen over the previous two months. The CBIZ SBEI tracks payroll and hiring trends for over 3,700 companies that have 300 or fewer employees, providing broad insight into small business trends.

According to the report, inflation concerns are eclipsing coronavirus-related worries among the public, driving more individuals into the workforce and prompting greater need among businesses as consumer demand rises. In March, 25% of companies increased their headcounts, 57% reported no change to their employment totals, and 18% decreased their staffing.  The Arts and Entertainment segment, for example, reported its most significant hiring boost since the beginning of the pandemic.

The ADP and Moody’s employment reports indicate hiring growth among small, medium-sized, and large companies. The March reading showed an overall increase of 455,000 private-sector jobs for the month. Small businesses accounted for 90,000 of those jobs on a seasonally adjusted, month-over-month basis. The ADP and Moody’s reports count small businesses as companies with 49 or fewer employees, while the CBIZ SBEI uses data from companies with 300 employees or fewer.

At the industry level, the most notable hiring increases were seen in Arts and Entertainment, Accommodations and Food Services, and Construction. Technology and Life Science, and Wholesale Distribution experienced hiring declines.

In most years, March activity tends to signal the start of seasonal hiring increases, as businesses prepare for the summer months, so expected growth observed over the last month is probably an annual trend. And while not an impressive number, the results do indicate an improving trend in hiring. If coronavirus cases continue to remain low, the spring months may be an opportunity for continued hiring growth for small businesses.

On the other hand, some segments are in desperate need of employees, including construction. While CBIZ tracks construction as one of the segments with a large number of small businesses, the AGC (Associated General Contractors of America) looks at construction hiring and employment levels overall. In their March report, construction employment exceeded pre-pandemic levels in 32 states. In fact, “Contractors have been adding workers as fast as they can find them,” said Ken Simonson, the association’s chief economist. “But there just aren’t enough qualified workers available in many states, as shown by the record number of construction job openings at the February.”

AGC notes that government data from the monthly Job Openings and Labor Turnover Survey show that there were 364,000 job openings in the construction at the end of February. That was the highest February total since the series began in 2001 and constituted a 52% jump in openings from one year earlier. Openings exceeded the 342,000 employees hired during that month, implying that construction firms would have added twice as many employees if they had been available.

Association officials said a lack of workers is delaying vitally needed projects. They urged officials in Washington to increase funding for career and technical education and allow more apprenticeship programs.

Want to tweet about this article? Use hashtags #construction #infrastructure #futureofwork