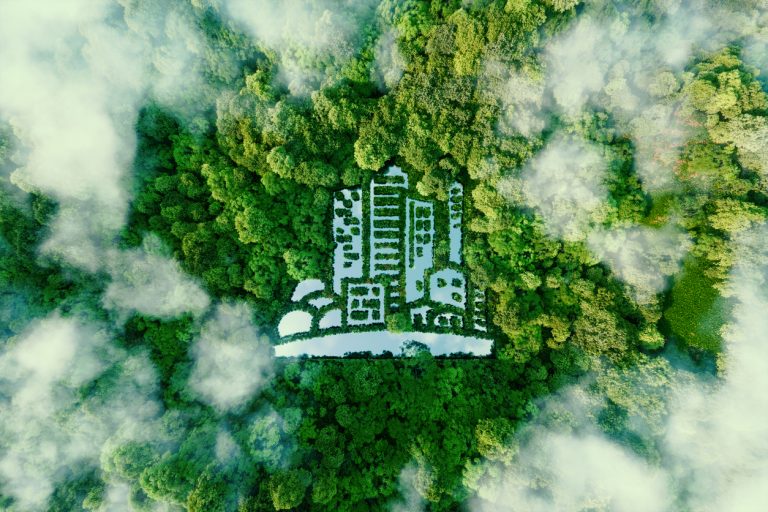 Going green is a mantra that many individuals are using to point out their conservation bona fides. Every bit helps but the larger the “bit,” the better it helps. While governments at every level make promises—see COP26, The Paris Accords—it falls on the people to make those promises reality. And the local initiatives, both individual and government, are the starting points for actual success.

Cities come in a wide variety of sizes, with aging or recently rebuilt infrastructure, with green or concrete gray as the major color, with plans for the future or an eye on the past. In an unfortunate number of cases today, cities can also come devastated and reduced to rubble. War, in Ukraine and other countries around the world, has had a major impact on urban areas. The resiliency of the governments and people in these cities will determine when—and if—they will rise again.

Ukraine has shown determination and fortitude in its resistance to Russian invasion throughout 2022. Despite the ongoing invasion, Ukraine’s local authorities are already thinking about the future and planning how to rebuild their cities. They also intend to share their plans with the local population. It has begun the planning stage for a return to the status it once had as a cultural and civic center in Eastern Europe.

Step one was the commitment to a consortium of companies, supported by the French government and led by Egis Group, an international firm active in the consulting, construction engineering, and mobility service sectors. Egis has been operating in Ukraine since 1993, working on a variety of private and government funded projects across various sectors such as civil engineering, road and bridge construction, water, urban transport, ports and waterways, and energy.

The consortium, which includes Dassault Systèmes and B4 Design and Engineering, has been selected by the Ukrainian government to mobilize their expertise and experience for the reconstruction of urban areas in Ukraine. The project is supported by a grant from the French Treasury and will combine Dassault Systèmes’ 3DEXPERIENCE platform and Egis’ and B4’s construction engineering expertise.

A two-phase approach will start with a damage assessment and reconstruction cost analysis in the Chernihiv Oblast, followed by a strategic master planning for reconstruction in the city of Chernihiv. In Ukraine, the term oblast denotes a primary administrative division.

The first phase will consist of diagnosing the damages in the Oblast, to forecast the reconstruction costs and define which infrastructures to rebuild first. Dassault Systèmes’ 3DEXPERIENCE platform will support the collaboration and host all the information and analysis gathered by Egis and B4 experts. Satellite data analysis will automatically detect and highlight impacted areas and will be cross-checked by inspections in the field to validate the calculations and the prioritization strategy.

The second phase will involve building a virtual twin of the city of Chernihiv on the 3DEXPERIENCE platform. It will focus on optimizing how the city will be rebuilt including the design of new buildings and the organization of city transportation, infrastructure, and other services. Throughout the project, all information collected will be fed into the virtual twin of the city to enable the partners to collaboratively build the city masterplan.

Stakeholders from diverse sectors will use the virtual twin to collaboratively test different scenarios involving variables such as flooding risks, accessibility, transportation, land use, position of key urban assets, and existing water, heat, sewage, and other infrastructure networks. In parallel, they will source information from existing documents and city departments to ensure that the needs and expectations of inhabitants in each neighborhood, the vision of elected officials, and economic and social development challenges are all considered.

The idea is to build more sustainable, resilient cities. Virtual twin experiences enriched with expert knowledge, know how, and data enable exploration of unlimited scenarios and the ability to optimize the ones that will best answer the needs of the population, address climate change, upgrade plans for public transportation, smart services, and utilities.

Digital-twin modeling and simulation use cases include the identification of current and future heat islands, the assessment of vulnerable populations, the percentage of permeable surface and vegetation levels, the water retention potential of green rooftops, detailed tree analytics, and water run-off and carbon storage metrics.

According to ABI Research, global public and private investment levels in green urban infrastructure are expected to increase from $606 billion in 2022 to $978 billion in 2030 across a wide range of green assets, including city parks, urban forests, blue spaces such as ponds and lakes, rooftop gardens, green walls and buildings, and pedestrianized green streets as part of new urban concepts.

Whether rebuilding war-torn cities in Ukraine or remodeling aging infrastructure in the U.S., green is becoming the color of the year for 2023.