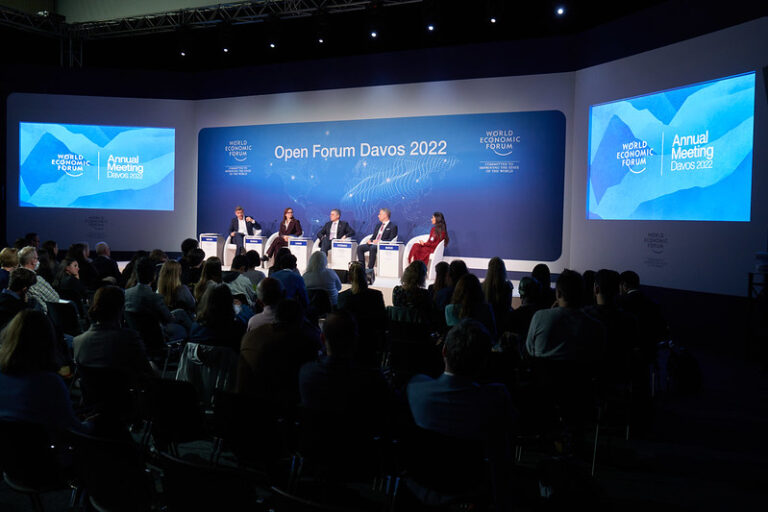 After being postponed from January due to Omicron concerns, Davos 2022 finally went down in late May in Davos, Switzerland, with about 2,500 attendees—and while that’s a respectable number, many noted that some mainstays from years past were notably missing. The WEF’s (World Economic Forum’s) annual meeting hadn’t convened in person since January 2020, shortly before COVID-19 took the world by storm. And since the Davos crowd met that fateful year, a lot has happened, to say the least. In fact, a lot has changed even in the last year, considering Vladimir Putin spoke by invitation at the 2021 virtual meeting, and the Russian prime minister and Russian oligarchs were blacklisted from the event this year due to Russia’s unprovoked invasion of Ukraine. Russia’s party house in Davos has even been taken over and redone up as an art exhibition raising awareness about Russian war crimes.

Unlike in the years leading up to the pandemic and war in Eastern Europe, topics discussed at the 2022 event included deglobalization and “friend shoring,” a global trade strategy in which nations limit commerce to a select group of “friend” nations—a sort of circle of trust for international trade partners. Beyond global trade, other key topics included sustainability and climate change, as well as concerns over global economic growth … or lack thereof. In fact, economic instability due in large part to supply chain disruptions and imbalances in the supply and demand equation in many industries was an important talking point among the CEOs and business elite present at this year’s Davos. Some in attendance called the atmosphere “gloomy,” as many business leaders admitted fears that there will be an economic recession in the near future.

Cisco CEO Chuck Robbins warned against creating a bigger problem than there really is through fear mongering. Robbins said while his company is obviously dealing with the same semiconductor supply issues every other company in the space is, demand is still strong, and he says the best stance is a “wait and see” approach. And while the official word is that there’s a global economic slowdown—not a recession—in the works, the reality is 2022 is seeing what the IMF (Intl. Monetary Fund) has called “a potential confluence of calamities.” The COVID-19 pandemic, the war in Ukraine, inflation, supply chain issues, the volatility of the global financial market, and climate change are among the major issues making business leaders nervous, and they brought their nerves to Davos. Certainly, the tech industry is on edge for all the same reasons. During the event, rumors were rampant about Apple’s latest iPhone production schedule being pushed back thanks to COVID-related shut downs in China. And the semiconductor shortage continues to plague every sector that relies on chips, with no swift end in sight.

But less doomsday-ish discussions were had as well. Panelists at Davos discussed the promise of the metaverse, for instance. And business leaders like Intel CEO Pat Gelsinger envisioned a future in which the U.S. and Europe are far less reliant on Asia for chips—perhaps reaching 50% U.S./Europe and 50% Asia by the end of the decade, compared to the much more drastic 80% Asia and 20% U.S./Europe split of today.

Finally, the U.S. government and the World Economic Forum also announced a major expansion of the First Movers Coalition, a public-private partnership created to try to clean up carbon-intensive sectors like heavy industry. The WEF says the coalition now boasts more than 50 corporate members worth about $8.5 trillion, plus nine governments, including the U.S. Growth in the coalition membership is a great sign for global sustainability efforts, which despite other important topics was still much discussed at this year’s unique event.