Keeping it in the Family 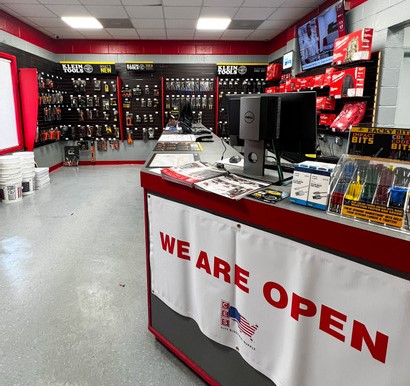 When large suppliers seek new markets, being able to open facilities quickly can give the company a local edge. Contractors that depend on local merchants for their building materials, tools, and equipment, benefit from having those suppliers nearby, not an hour’s drive away.

As an example, top-ten electrical wholesale distributor, CES (City Electric Supply), recently opened a branch in Moncks Corner, S.C. This facility, about 35 miles north of Charleston, S.C., will save local builders and remodelers as much as an hour and a half in travel time compared to shopping at the next nearest CES store. With more than 530 branches across the United States, Moncks Corner is the company’s 31st branch in South Carolina.

The Moncks Corner Branch is managed by Brandon Dryden, a Navy veteran with construction and electrical experience and a CES employee for more than three years. Keeping it in the family, Brandon’s father, Michael Dryden, is the district manager for CES. The new shop, a former bulk store, was opened in a building already owned by CES. As the town grew, doubling in population in the past ten years, CES saw an opportunity to help the local economy and its builders.

With a lot of dedication, the team went to work, making sure the branch looked its best for the grand opening. The group made time to build out a new custom counter in just under two months. They had to redo the floors, the racking, and the slat wall and had to have the lights rewired. In the latter case, they certainly knew where to go for electrical supplies!

CES is also a family-owned company, an electrical wholesale distributor headquartered in Dallas, Texas. The company was founded in 1951 by Tom Mackie in the United Kingdom and expanded to the United States in 1983. Today, CES employs more than 3,000 people in branches across the U.S., now including the new South Carolina store. In an area that includes a school system, electrical cooperative plants, and a telecom company, CES Moncks Corner is eager to play in role in matching CES traditional goal of serving all its customer’s needs.

Want to tweet about this article? Use hashtags #construction #infrastructure