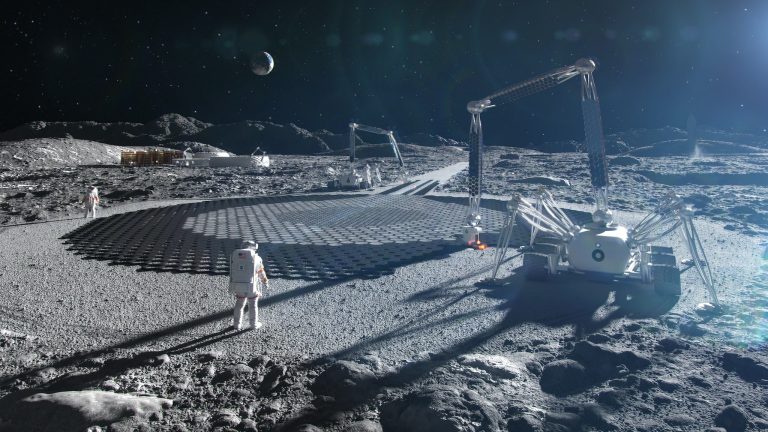 In the mid-1950s, TV sets were tuned to the Jackie Gleason classic The Honeymooners. Gleason played the character Ralph Kramden, a New York bus driver with big ideas and limited ways to match them with reality. In most episodes, Ralph’s short temper got the best of him, leading him to yell at others and to threaten comical violence, usually against his wife, Alice. Ralph’s favorite threats to her were “One of these days … One of these days … Pow! to the Moon, Alice!”

We have no patience with such verbal threats today, on TV or in the real world, but we do have ideas about going (back) to the Moon. NASA has signaled that, through the Artemis program. Artemis is the first step in the next era of human space exploration. Together with commercial and international partners, NASA will establish a sustainable presence on the Moon to prepare for missions to Mars.

However, for a sustained lunar presence, robust infrastructure will need to be built on the Moon to provide thermal, radiation, and micrometeorite protection. How? By building structures using locally sourced materials, to use an earthbound phrase. And those materials are being explored as “ink” for 3D printed buildings.

ICON develops advanced construction technologies that use proprietary 3D printing robotics, software, and advanced materials. They are shifting the paradigm of homebuilding on Earth and beyond and received a contract, awarded under Phase III of NASA’s SBIR (Small Business Innovation Research) program, of nearly $60 million that builds upon previous NASA and Department of Defense funding for ICON’s Project Olympus to research and develop space-based construction systems to support planned exploration of the Moon and beyond.

ICON’s Olympus system is intended to be a multi-purpose construction system primarily using local Lunar and Martian resources as building materials to further the efforts of NASA as well as commercial organizations to establish a sustained lunar presence. The intent is to change the space exploration paradigm from “there and back again” to “there to stay.”

To do that, explains ICON, we’re going to need robust, resilient, and broadly capable systems that can use the local resources of the Moon and other planetary bodies. The final deliverable of this contract will be humanity’s first construction on another world, and that is going to be a very special achievement. ICON will continue to pioneer methods and technologies to solve some of the most vexing construction challenges facing humans, from affordable housing to living on other planets.

In support of NASA’s Artemis program, ICON plans to bring its advanced hardware and software into space via a lunar gravity simulation flight. ICON also intends to work with lunar regolith samples brought back from Apollo missions and various regolith simulants to determine their mechanical behavior in simulated lunar gravity.

These findings will yield results that inform future lunar construction approaches for the broader space community, including for critical infrastructure like landing pads, blast shields, and roads. This technology will help to establish the critical infrastructure necessary for a sustainable lunar economy including, eventually, longer term lunar habitation.

Want to tweet about this article? Use hashtags #construction #sustainability #infrastructure #IoT #edge