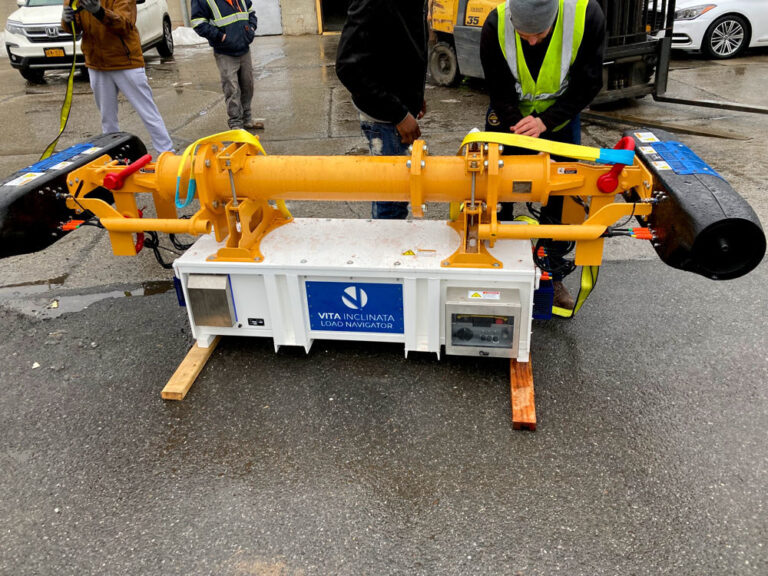 Construction cranes are everywhere as business picks up and projects resume or begin. The OSHA (Occupational Safety & Health Administration) estimates approximately 225,000 cranes are in operation across the country on any given day. All crane operators and workers on sites where cranes are used, more than 250,000 individuals nationwide, are at risk for crane-related injuries and fatalities. Technology can help remove some of those risks by moving the positioning crew out of the swing and drop area, eliminating taglines completely.

Whether in the skyscrapers of New York City or the prairies or Texas, hard working cranes are…well, they are working hard. Vita Inclinata, a developer and producer of crane load stabilization and precision hardware, is working hard to help, too. It is providing VLN (Vita Load Navigator) 20 Tonne (VLN-20T) VLN systems to Trident General Contracting in New York. Trident will use the VLN systems for its nine Dekalb Avenue skyscraper job, The Brooklyn Tower, a 1,066 foot-tall, 73-story building, and on its 995-foot-tall, mixed-use skyscraper project at 520 Fifth Avenue in Manhattan.

The VLN is a remotely operated, suspended load system that allows crane operation crews the precision control to orient its lifts without being in the critical path of the load. The system dynamically adjusts to load sizes, crane movement, and wind conditions, allowing high-precision lifts in the most challenging environments. The VLN system eliminates the use of taglines, improves the productivity of lifting and placing loads while enhancing employee safety. Taking the man out of the pick-and-drop zone during dynamic movements makes sense.

However, there are other benefits to the VLN system. It’s self-contained so no field maintenance is required. And it is easy to learn and use—within five minutes, Trident’s riggers were having load placement contests on its training day. The VLN provides simple control over the load and stability in winds with minimal effort from the riggers/operators. Two memory positions are available for ease of multi-pick operations and the rig has long battery life and ease of charging. It’s also easy to transport from job to job, making it ready for work quicker.

Outside of the big city, construction is also picking up and cranes are part of the equation. Vita Inclinata delivered three VLN systems (two VLN20 and one VLN40) to HOLT Crane & Equipment, a Texas-area distributor. HOLT will take advantage of the VLN systems for renting, selling, and helping its customers fit near-term and long-term construction requirements.

Want to tweet about this article? Use hashtags #construction #IoT #sustainability #futureofwork #infrastructure