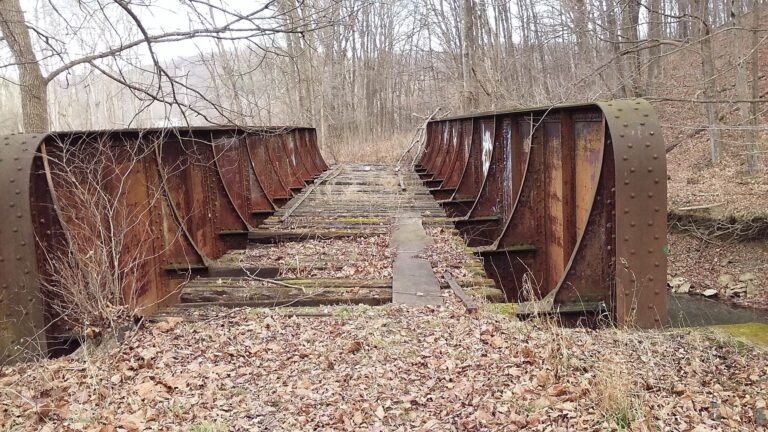 Railroads have a long and controversial history in the U.S. In some states, railroads were welcomed from the earliest days while in others they were thought unnecessary. Ohio, for example, depended on the vast canal system—the fabled Erie Canal and others—for moving people and products.

The first railroad completed in Ohio connected Toledo, Ohio, with Adrian, Michigan, a total of 33 miles. The trip between the two communities took three hours. Many people deemed railroads as risky, and some investors feared that they could lose their investment in railroad companies. Still, by 1850, the Ohio legislature had chartered 76 railroad companies—although many of these companies never laid any track.

Today, trains are still part of the transportation fabric of the country, but many lines have been discontinued, closed down due to weather events such as tornadoes or hurricanes, or as the highway system expanded and the Interstate took over the challenge of moving products and people across the nation. What to do with those rails going nowhere? How can the right of way become the right way to help a community?

Holmes County, located in northeastern Ohio, is the heart of the state’s Amish country. Visitors to this rural enclave will find meandering country roads and bucolic natural areas, as well as the scenic Holmes County Trail. The path was the first recreational trail in the country designed to accommodate Amish buggies, and throughout much of the route it is just as common to pass a horse-drawn buggy as it is to pass a cyclist or walker.

The trail began its life as a spur of one of Ohio’s earliest railroads, the Cleveland and Pittsburgh, and the tracks reached Millersburg in 1854. A catastrophic flood in 1969 washed out sections of railbed, leading to the end of the line’s use. Fortunately, with the conversion of the railway to a rail-trail, which opened in 2005, a new generation of users—bicyclists, walkers, in-line skaters, and horse and buggy riders—can now roll along this picturesque corridor.

Woolpert has been contracted by the Holmes County Park District to provide survey, engineering, and design services to renovate 4 miles of the Holmes County Trail, from Glenmont east to State Route 520. Woolpert will produce detailed construction plans that identify infrastructure repairs to the trail, four bridges, retaining walls and culverts, as well as environmental improvements and aesthetic enhancements.

This $3.6 million project is part of a phased plan to complete the 29-mile Holmes County Trail. The trail will be 16-ft. wide, except over bridges and when pinched by Black Creek, to accommodate horses and buggies, pedestrians, and cyclists. The path was the first recreational trail in the U.S. designed to accommodate Amish buggies. It is part of the 326-mile Ohio to Erie Trail and aligns with the Rails-to-Trails Conservancy, which is building a nationwide network of trails by converting former railroad corridors to multiuse public paths.

This project illustrates how an environmentally sensitive area, complete with challenging and beautiful wetlands, can be expertly repurposed to incorporate local resources and improve the livability of a region. The railroad bed remains in the Glenmont to Killbuck trail, but the tracks and most of the timbers have been removed. Woolpert will clear the trail and place base material and asphalt to support all users and convert the bridges to pedestrian use.

The Holmes County Trail is a vital component of the Ohio to Erie Trail, a developing 320-mile route, which will eventually span Ohio from the shores of Lake Erie in Cleveland to the Ohio River in Cincinnati. Final design plans have been submitted for this project, and construction is expected to begin in the fall of 2022.