5G on the Edge 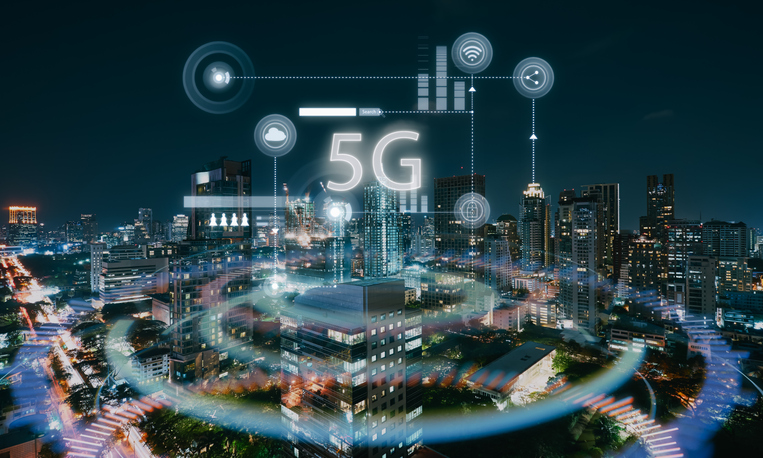 The next big thing? Like rust, technology never sleeps. Innovation comes in waves, it seems, and the next wave to crash over us started seriously in 2019. Called Fifth Generation networking, 5G for short, this latest standard for cellular networks began deployment that year, slowly replacing the common 4G networks that have been around for a decade or so. Being implemented across the world, 5G offers some advantages—and a few drawbacks—over current technology.

For example, Intel sees some of the biggest benefits of 5G as its high capacity and minimal lag. With up to 5x the bandwidth available with 4G, 5G will give rise to new methods of production and distribution. Early tests also show 5G may cut network latency in half. Compelling 5G use cases have already been identified in the healthcare, agriculture, retail, transportation, logistics, and manufacturing industries, among others.

A software-defined network largely operating on the cloud, 5G is hailed as the next generation of ultra-fast connectivity. It can support millions of devices at one time. Its robust performance metrics include greater traffic, increased device connectivity, and better reliability.

The technology applications of 5G, though, are about more than faster wireless connection speeds. The automotive industry, for example, intends to use 5G technologies to decrease time delay in data delivery to autonomous vehicles. As technology adoption continues globally, the most successful technology firms will be those best positioned to compete and meet this demand internationally.

However, the interconnectivity and efficiency 5G offers comes at a cost, both economically and politically. While 3G and 4G use existing wireless infrastructure with frequencies on a radio spectrum, 5G requires significant capital investments, given the ample space required to accommodate larger bandwidth capacity and increase overall functionality. Some global telecommunication companies have amended their current business model to control for rising costs, while others are exploring the potential to network share.

Most cellphone users, however, will be more annoyed with the need for a new phone to take advantage of 5G than they will be impressed by the benefits over 4G. Still, by 2025, the industry predicts there will be, worldwide, about 1.7 billion subscribers on the 5G networks.

But 5G has value beyond providing better download speeds for streaming video on a smart phone—for those with great eyesight. In addition to 5G being faster than existing networks, 5G can connect more different devices, and even if people are in crowded areas, the servers will be more unified, improving the quality of Internet services. Due to the increased bandwidth, it is expected the networks will increasingly be used as general ISP (internet service providers) for laptops and desktop computers, competing with existing ISPs such as cable, and will make possible new applications in IoT (Internet of Things) and M2M (machine-to-machine) areas.

The IoT will add billions of devices to the 5G networks as technology enthusiasts find new things to add. GSMA Intelligence forecasts IoT connections will reach almost 25 billion by 2025. The industry needs to make sure these devices build in security by design if it is to prevent damaging attacks.

In previous cellular generations, the physical infrastructure was built on proprietary hardware and software. This provided a level of protection. Indeed, mobile networks largely avoided the data theft that has impacted the traditional computer industry. However, according to the Thales Group, the move to a virtual 5G core could change that. It uses more standardized systems, making it much easier for malicious users to break in.

For all the excitement around 5G, security experts know it has the potential to usher in a wave of entirely new threats. Indeed, in a recent survey, when respondents were asked what their main concern was about 5G security, more than 40% said the use of unsecured network technologies concerned them most. Why? The vast capacity of 5G gives MNO (mobile network operators) the ability to create smaller virtual networks at the edge of the 5G core. Called “network slicing,” MNOs can allocate slices to enterprises so organizations can run their own mini networks, customized to their needs.

More capacity means more connected devices, and these devices will not be smartphones. They will be unmanned sensors, meters, trackers—each one a potential entry point for hackers. Yet many of these enterprises will lack the security expertise needed to combat the attacks that come with running such a network, leading to another “staffing gap.”

The last year has brought unrelenting headlines about cybersecurity attacks. Foreign governments have tampered with the software supply chain, targeted on-premise servers, and hacked into sensitive government files. Criminal ransomware groups have attacked schools, penetrated hospitals, and shut down a critical national pipeline. As documented in the recent Microsoft Digital Defense Report, these attacks are growing and becoming more sophisticated.

Microsoft, working closely with government and business leaders across the country, committed $20 billion in five years to advance its own security solutions and to protect its customers, as well as $150 million to help U.S. government agencies upgrade protections. The company also expanded its cybersecurity training partnerships and launched a national campaign with U.S. community colleges to help skill and recruit 250,000 people into the cybersecurity workforce by 2025, representing half of the country’s workforce shortage.

Many of these training programs will include security for the edge computing environment. Edge computing is a distributed computing framework that brings enterprise applications closer to data sources such as IoT devices or local edge servers. This proximity to data at its source can deliver strong business benefits, including faster insights, improved response times, and better bandwidth availability.

The technology ecosystem for edge computing is subject to ongoing maturity. It will take time to re-engineer existing hardware and software for highly distributed, space- and resource-constrained edge locations. Hyper-scalers like Amazon, Google, and Microsoft are already taking a strategic approach with new solutions aimed at unlocking the value of 5G and edge networks.

However, 5G edge networks face several key barriers that could impact market maturity. The business case depends on the market’s appetite for 5G edge networks and the desire by enterprises to modernize their operations. ABI Research believes a good starting point to drive ecosystem maturity is for the industry to acknowledge building a 5G edge network is necessary.

The second step is to figure out how to best integrate these new technologies into the enterprise business processes. That may not be a matter of technology but a matter of the degree of effort required to initiate service convergence and a process change that spans marketing, sales, product design, and so on. This remains the topic of much discussion in the industry.

To gain status in the IoT universe, 5G needs to be provided as one component alongside different technologies such as artificial intelligence, edge computing, data storage, and security technologies, raising the bar for potential suppliers. An enterprise-wide digitization platform needs to be based on a completely different business model to be appealing to organizations. As such, a successful business model should distinguish between the provision of the platform infrastructure alongside the provision of enterprise applications and services.

So why isn’t 5G everywhere by now? There are some issues with security, as noted, and some with interference with other users of the radio spectrum near 5G’s 3.7-3.98 GHz band. The major objection to the roll-out of more 5G cells is coming from the aviation side of transportation. Autonomous car manufacturers may be betting on 5G to speed things up, but airlines are more worried that 5G will slow things—their airplanes—down.

The FAA (Federal Aviation Admin.) is working with the aviation and wireless industries to find a solution that allows 5G C-band and aviation to safely coexist. While that work is underway, the FAA alerted operators that NOTAMs (Notices to Air Missions) may be issued to restrict operations in areas where 5G interference is possible. It also provides additional information about aircraft systems that could be affected.

The FAA’s concerns are for all transport and commuter category airplanes, and all helicopters, equipped with a radio altimeter. The radio altimeter is more precise than a barometric altimeter and for that reason is used where aircraft height over the ground needs to be precisely measured, such as during automated landing or other low altitude operations. The receiver on the radio altimeter is typically highly accurate, however it may deliver erroneous results in the presence of out-of-band radiofrequency emissions from other frequency bands.

The radio altimeter must detect faint signals reflected off the ground to measure altitude, in a manner similar to radar. Out-of-band signals could significantly degrade radio altimeter functions if the altimeter is unable to sufficiently reject those signals. Commercial aviation radio altimeters operate in the 4.2-4.4 GHz band, which is separated by 220 megahertz from the C-Band telecommunication systems in the 3.7-3.98 GHz band.

Therefore, FAA restrictions were prompted by a determination that radio altimeters cannot be relied upon to perform their intended function if they experience interference from 5G cells. The rules require revisions to the limitations section of the existing aircraft/airplane flight manual or rotorcraft flight manual, as applicable, to incorporate limitations prohibiting certain operations requiring radio altimeter data when in the presence of 5G C-Band interference in areas and at airports identified by NOTAMs.

So, while 5G can improve many aspects of personal, industrial, and commercial applications, it can also be a threat to safety. Technology companies, tech associations, developers, and users all have a stake in improving the telecommunications network. At present, 5G is the gold standard—in theory. Making it work to everyone’s benefit, safely, will be the key to its success.